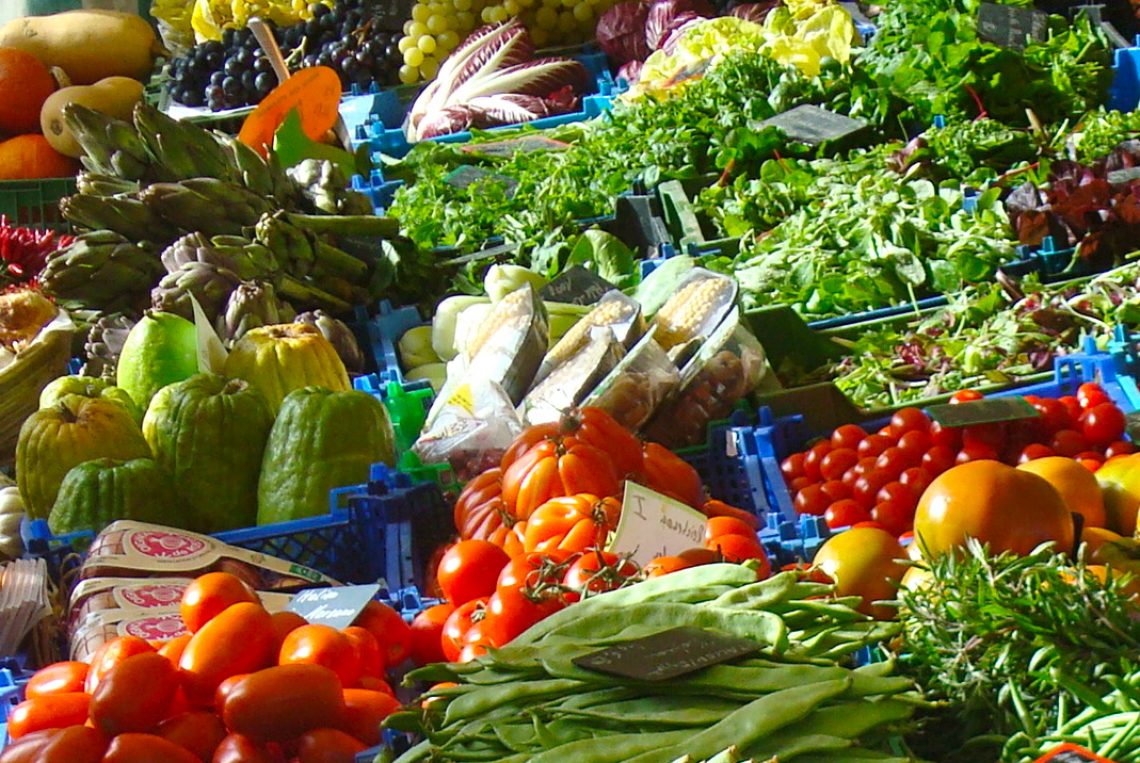 I’ve been to some nice backyard barbecues but I think I can now safely say that I attended “The Ultimate Barbecue and Dance Party”, while on a cruise no less. The  party was held on the beautiful pool deck of the Seven Seas Explorer while on a 12 night cruise along the coast of France, Portugal and Spain. We had been onboard for 6 days and knew the ship offered wonderful menus in all of its restaurants and thought that a barbecue on the pool deck would be nice but we were not expecting to be amazed.

My husband and I arrived a little early to have a cocktail at the pool bar, just as the finishing touches were being put into place. Colorful flags stretched above the deck, white table linens covered tables surrounding the pool and were laid with polished crystal and silver. Musicians were setting up their instruments and within hours after serving lunch, the crew had transformed the pool deck into a gorgeous outdoor restaurant.  As people slowly gathered to find a table, Champagne, wine and cocktails were being offered. This was the scene for a very nice barbecue, very nice indeed.

Click on any photo in the article to enlarge and see a slide show. 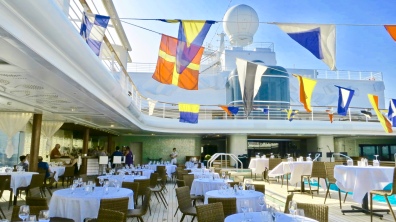 Pool Deck With Pool Bar In The Background 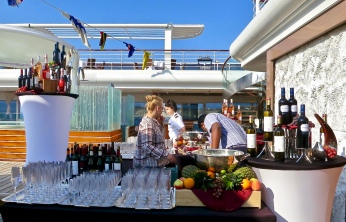 Setting Up The Wine And Champagne Bar

I decided to stroll over to the Pool Grill and see what was going to be offered. On one side there was a fresh seafood buffet with chilled Alaskan King Crab legs, shrimp and mussels piled high on ice. A chef was grilling lobster tails and shrimp kebabs. This alone let me know that it was going to be a special party, actually very special. 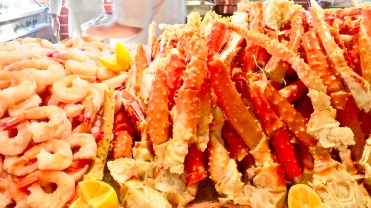 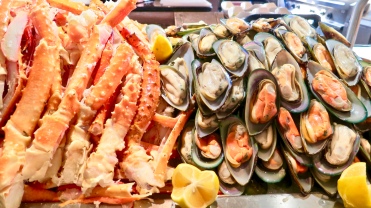 About this time my husband commented, “well if it was a really good barbecue, there would be a whole roasted pig”. Guess what, he was right. Just one thing though, there was not one but two whole roasted pigs just waiting to be pulled apart. Pulled pork, now we are talking about a real barbecue as far as this Texas girl is concerned.

Of course that wasn’t all, there was more, much more. On the other side of the Pool Grill, cooked to order pasta and risotto was being prepared along with sautéed Mediterranean vegetables. In another area, there were sliced cured meats and over a dozen different, perfectly ripe, European cheeses, a large assortment of salads as well as fresh baked breads, cakes and pastries. Last but not least, there was an ice cream sundae bar with sauces and sprinkles. 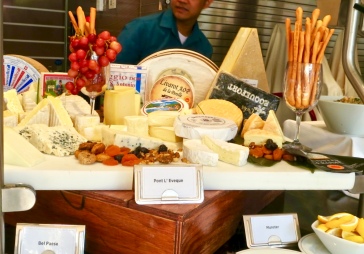 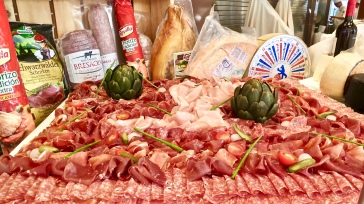 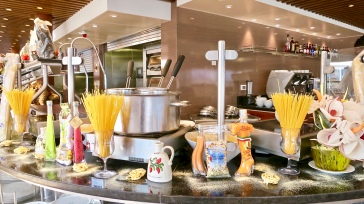 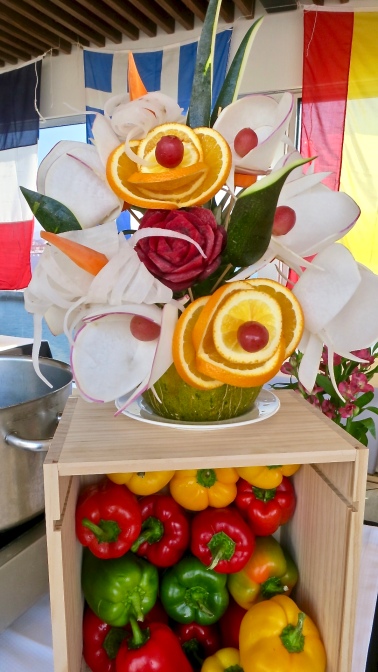 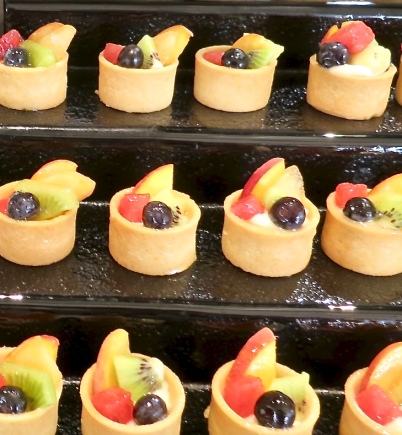 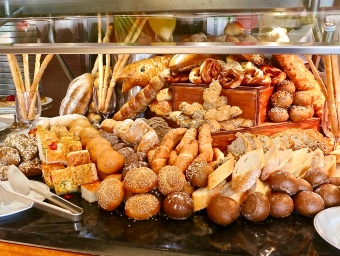 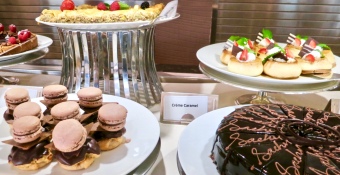 A Small Part Of The Cakes And Pastries At The BBQ

I have to take my foodie hat off to Senior Executive Chef Sean Emsile and his entire galley team for pulling off “the ultimate barbecue”. The highly skilled and imaginative chefs not only prepared the freshest of ingredients, they were prepared to perfection and beautifully presented. 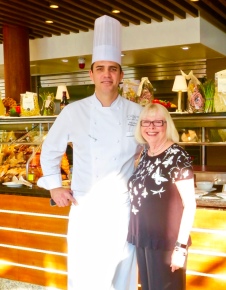 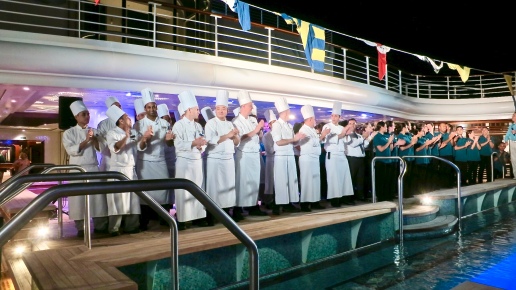 But wait, I did mention a dance party didn’t I. Yes, there was an orchestra and the ship’s production cast of singers and dancers, everything necessary to “Rock the Boat” as the dance party was being called.  As the sun went down, the outdoor lights came on, the music went from mellow to hot and it was time to party.

While I never felt the Explorer rocking that night, I can guarantee you that there was a lot of swinging and rocking happening on the pool deck. A cool breeze and a starry  night sky was the “icing on the cake” so to speak.

If  you are ever invited to a party on the pool deck of the Seven Seas Explorer, make sure you go. If it is anything like the one we experienced, I know you will have a great time and you will be saying the same thing. It was the “ultimate barbecue and dance party” that you ever had the pleasure to attend.

I thought that an evening barbecue outside on the pool deck would be nice event but was not expecting to be amazed with how nice it was. Have you ever gone to a barbecue and dance party that was memorable like this one? I’d love to hear about it.

105 thoughts on ““The Ultimate Barbecue and Dance Party””